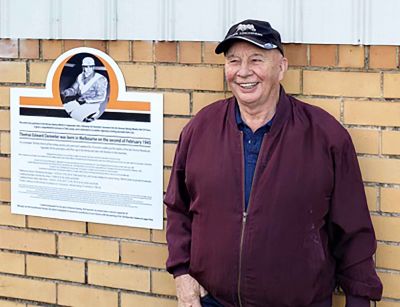 Harness racing legend Ted Demmler was left shocked and humbled after a special honour was bestowed upon him by the Warragul Club yesterday.

The horse stabling complex at Logan Park is now named the “Ted Demmler Stables” in recognition of the 76-year-old’s contribution to the sport.

The 2011 Gordon Rothacker Medal winner was surprised by the unveiling of the signage, which took place during Monday afternoon’s meeting.

Demmler’s career highlights are detailed on the sign, including:

“A great ambassador for the sport of Harness Racing, Ted Demmler has always been a staunch supporter of Warragul and the local Harness Racing Club is delighted to honour his contribution to our industry with the naming of the Ted Demmler Stables at Logan Park,” the sign reads.

Demmler won the 1987 World Drivers’ Championship in Europe and is a Metropolitan Trainers’ Premiership winner here in Victoria.

By Tim O’Connor for HRV

Meadowlands Pace to be broadcast live