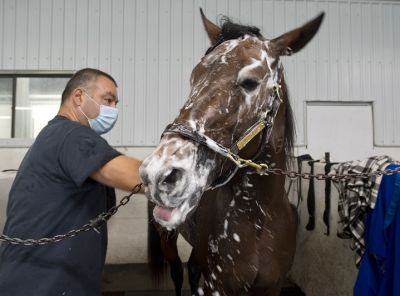 Harness racing traner Luc Blais will have two horses in Saturday’s inaugural Mohawk Million for 2-year-old trotters at Woodbine Mohawk Park, so he is understandably excited about the event. But the trainer knows he is not alone in being pumped up about Canada’s richest race since 2012.

The Mohawk Million is the first million-dollar buy-in race in harness racing history. Nine spots in the 10-horse field were available for purchase for $110,000 (U.S.), with the final slot in the race given to the winner of the William Wellwood Memorial.

Blais-trained On A Streak won the Wellwood to earn his place in the Mohawk Million. The colt is owned by Serge Godin’s Determination stable, which also had purchased a spot in the race. Donna Soprano, the Blais-Determination tandem’s undefeated filly, was selected by her connections to fill that spot.

“It’s very exciting,” Blais said. “At the beginning, you’ve got a slot, but you don’t know what horse will be there. Now, we’re in. We are lucky, our horses have been racing well. You need luck in this game, and I think everything is going well right now. I hope it keeps going in that direction.

“But we all feel the same this week. We all feel excited. This is something new and I think people are interested to see it. That is good for the game.”

The Mohawk Million carries a Canadian purse of $1.32 million, which converts to $1 million U.S. dollars. The winner of the race will receive the traditional 50-percent purse payout and all starters will receive at least one percent of the purse.

Donna Soprano, undefeated in five races this year, will start the Mohawk Million from post three with regular driver Bob McClure. Her victories include the Peaceful Way Stakes, a division of the Champlain Stakes, and the Pure Ivory Series final. She has won every race by a minimum of one length and average of nearly three lengths.

“I think she has a lot of character,” Blais said. “She was not easy to bring here, but we figured her out, the way she wanted things. Every start is better and better, and she is more handy on the racetrack. Her last couple starts, she looks like a real professional. She acts like a special horse.”

Donna Soprano is a daughter of Donato Hanover out of the O’Brien Award winning mare Windsong Soprano. She was purchased for $190,000 at the Standardbred Horse Sale. She has earned $210,820 this season. 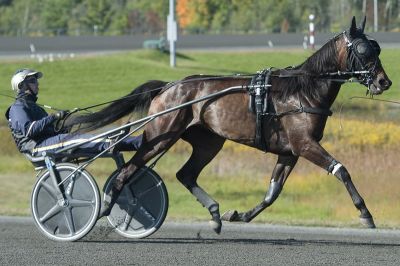 Blais and Determination selected Donna Soprano for the Mohawk Million over stablemate Macho Martini, a colt who won his first seven races before finishing third in the Wellwood Memorial and then suffering interference and going off stride in the stretch of an Ontario Sire Stakes Gold division.

“It was a good problem,” Blais said about having to make a choice. “Macho Martini already has nine starts this year and he raced very big in the Wellwood. He had a rough mile. Donna has only five starts and she looks very hot right now.”

On A Streak, a son of Cantab Hall out of Habit’s Best, is a half-brother to O’Brien Award winner Habitat and was purchased for $155,000 at the Lexington Selected Sale. He got his first win in the Wellwood, where he bested previously undefeated Southwind Tyrion by a head. A week earlier in their Wellwood elimination, On A Streak suffered a nose defeat to Southwind Tyrion.

“He was second that day, but he raced big,” Blais said. “I was not really surprised (when he won the Wellwood). He is getting better and better every start. It seems he is more mature and he knows what to do now, more than in the beginning. He is a nice horse, a very strong horse. He just needed a little maturity and now I think he’s there.”

On A Streak will start the Mohawk Million from post seven with driver Scott Young.

For more about the Mohawk Million and Saturday’s stakes, click here.