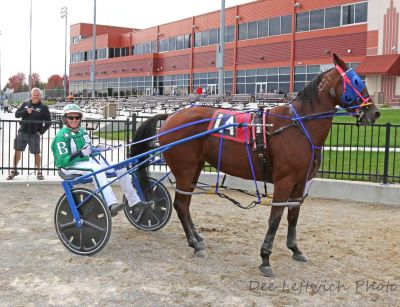 Columbus, MN – The featured event on the Tuesday afternoon harness racing program at Running Aces was the $9,000 Mares Open Handicap Pace with a field of seven talented distaffers lining up behind the gate.

The wagering favorites in the contest were the three New Zealand imports – My Kiwi Lady N was hammered down to 1-5 late and the Jose Cervantes owner entry of Motu Moonbeam N and Quite A Delight N were sent off as the clear second choice at 5-2.
My Kiwi Lady N (Chris Scicluna) worked hard from the outside post to get to the front before the timer flashed up :28 seconds for the opening quarter. Quite A Delight N (Dean Magee) surged past to take over the lead before the :57.2 half mile and fended off pressure from Alwaysalittlemore (Mooney Svendsen) all the way down the backside and around the far turn.
As they straightened for home the other two New Zealand imports were bearing down from both sides on the leader and the kiwi trio hit the line together in a thrilling photo finish.
When the dust cleared it was Motu Moonbeam N (Braxten Boyd, $7.80) who had rallied from last to first to get up right on the money. The top three were all separated by just a neck in 1:54.3.
The winner is an 8 year old daughter of Bettor’s Delight, trained by Edward Hernandez. Today’s feature win was the sixth tally of the season and twenty-fifth career score for the winner of $460,115.
Driver Rick Magee led the Tuesday program with three winners and Owner/Trainer Mark Anderson had two winners on the card.
The 20 cent Pick-5 Jackpot carryover now stands at $17,908.84.
Live Racing continues at Running Aces through October 4. Post Time is 1:00 pm CDT on Wednesday, Saturday and Sunday.
By Darin Gagné, for Running Aces
ShareTweetSendSend