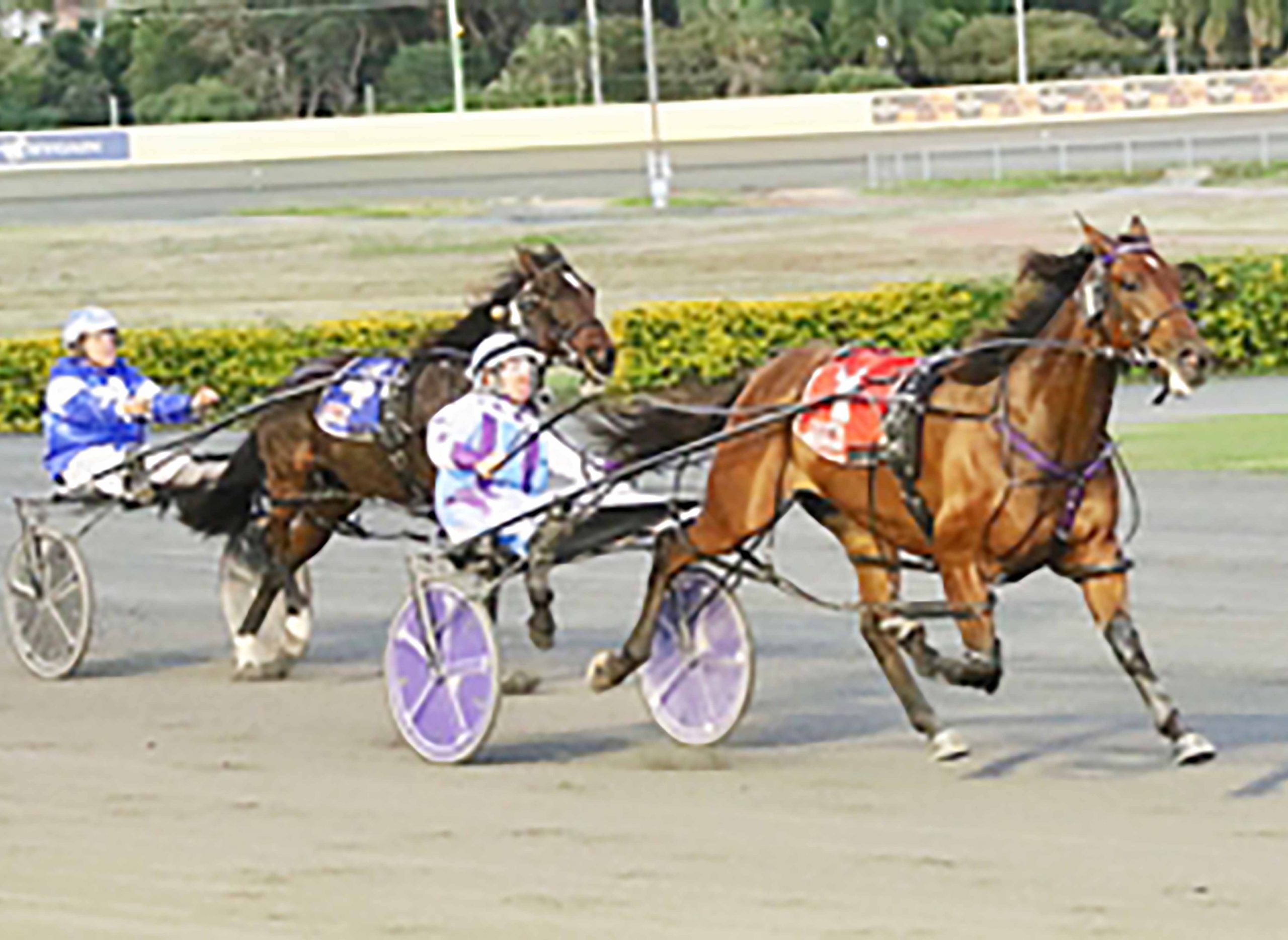 In-form harness racing driver Peter McMullen has sent a warning shot to his rivals ahead of the TAB Trot Rods finale, declaring the new benchmark time set by Adam Crocker will be very hard to beat.

‘Leader Peter’ McMullen heads into the finale this coming Wednesday evening with the fastest time in the series so far with the exciting Adam Crocker – who is trained by his wife Chantal Turpin – slashing the previous benchmark.

They did it in an incredible time of 63.797 seconds – knocking over the previous series leader, Yep Got Chooks – driven and trained by Trent Dawson – who posted the time of 65.03 just seven days prior.

The stable always thought Adam Crocker would be competitive in the popular series and got the job done in Heat Nine of the series.

“We have been setting this guy for a few weeks for it,” McMullen said.

“We always thought he would be the best chance from our stable to set a good time and set a time that would make everyone else struggle to beat.

“It is certainly, when you look at it all, he is the ideal horse at the top of the mark and there will not be many better quality horses in the series.

“It will certainly be going to be hard for anyone else to run a better time.”

Adam Crocker started the red hot favourite with the TAB on Wednesday night, rated a $1.20 chance, and he showed exactly why when bolting in by over five lengths.

As his nickname suggests, ‘Leader Peter’ was able to get to the front as they jumped in the short sprint race and did not ever look like getting beaten.

It was the first leg of a winning treble for McMullen on Wednesday evening.

The four-year-old pacer has been in stunning form for the McMullen and Turpin team, the victory his fourth on the bounce, which goes back to when he was previously racing in South Australia.

Adam Crocker has won his first three starts for McMullen and Turpin, two at Albion Park and now one up at Redcliffe around the triangle.

Adam Crocker has seen plenty of Australia in his short career, racing and being trained in Victoria, South Australia, New South Wales and now Queensland.

He has South Australian-based owners, who have long had an association with the leading Queensland stable.

“We have had horses for the owners for some time now, we trained this guy’s sister and we have a few more for the owners,” McMullen said.

“He was going to come a while ago but eventually made his way to Queensland after a few races interstate there.

“We are pretty happy to have him apart of the team.

“It would be hard to find a horse that has done as any kilometres as him.”

Following the TAB Trot Rods series, McMullen expects Adam Crocker to go through his classes in the Sunshine State and then potentially be sold to the USA later on.

So far across the exciting Trot Rods series, the leading time has been set and broken six different times leading into the TAB Trot Rods finale as the high-octane series reaches a thrilling conclusion at Redcliffe next week.

For a successive year, the series – which is staged over 947 metres at the Triangle – is poised to go down to the wire this coming Wednesday evening, with the fastest lap throughout the promotion receiving a $10,000 bonus.

Ahead of the feature night, a driver draft will be broadcast on SKY2 from 9.30am on Sunday, providing a tantalising build-up to the finale on Wednesday, May 26.

As part of proceedings, the five drivers who will participate on the night are Shane Graham, Narissa McMullen, Angus Garrard, McMullen and Nathan Dawson.

A $10,000 bonus will be awarded to the owners of the horse with the fastest time throughout the series, thanks to Otto Tuza.

The winning trainer will also receive an Otto Tuza two-horse angled and fully enclosed horse float valued at over $21,000.

A $1,000 bonus will be awarded to the connections of any horse that eclipses the previous best series time, split 80% to owner and 20% to trainer.

By Jordan Gerrans for Racing Queensland