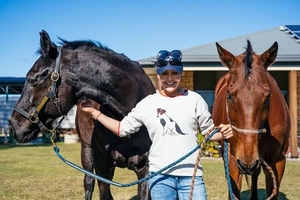 Hidden away at his Delaney’s Creek retirement paddock, champion pacer Blacks A Fake goes by a handful of names.

In his heyday, the legend standardbred was known as one of the greatest pacers we have ever seen – a four-time Inter Dominion champion, being the only pacer ever to do so, as well as countless other marquee honours.

Now, set to turn 21 this year, Blacks A Fake is known as Blackie, the Black Snake, or just Snake, and at times, the Carrot King.

These days, he is looked after by Victor and Cheryl Rasmussen – the parents of the famed driver and trainer of Blacks A Fake, Natalie Rasmussen.

The Snake, which he is at times called by Cheryl, comes from his attitude, she explains, as the gelding is cunning and conniving, in a cheeky way.

As for the name the Carrot King, Cheryl says he will knock you down for a carrot – such is his desperation to eat them.

All in all, the Queensland champion pacer is loving his post-racing life at Delaney’s Creek on a 20-acre paddock with his two friends, former pacer Major Cam, a 27-time career winner, and long-time companion Simon, ex-pacer Simons Left.

Simon is well known to the harness racing community, travelling with Blacks A Fake to many of his major wins and they are now joined in the same paddock in retirement.

Life is sweet for the retired pacers.

“He has a lovely, quiet, nice life,” Natalie said this month.

“He deserves it, he has been such a wonderful racehorse and I just think it is a great life to give him that now.

“He has no stress; he just eats and roams around his paddock.

“Mum and Dad were lucky enough to be part enough of him and Mum enjoys looking after him these days, all her barn of animals – I think she has 30-odd retired horses at the place, as well as a few rescue dogs – it is a lovely place.”

During her trip back to Queensland from New Zealand, Natalie spent some time with her former stable star, noting that he is still in great order for age, with healthy and strong legs still to this day.

Cheryl, who makes sure the great Blacks A Fake is rugged up every night, sees a happy retired pacer in her backyard.

“I think he is pretty content; he has his mates in his paddock, he has his feed every night, which is important,” Cheryl said.

“He is pretty happy, I think.

“It is a beautiful place for a horse, plenty of space to pick, they get their hay at night and their grains, they cannot ask for much else, even the older ones get their rug at night.”

With Simon by his side, Natalie explained that Blacks A Fake was a big sook when he did not have his mate with him during his racing days and it is still the same in retirement.

Simon is 23 years of age, as the pair have been together for the best part of 18 years, with his trainer describing him a calming influence on the multiple Inter Dominion winner.

Those down at Albion Park Harness Racing club believe the harness racing industry in Queensland is what it is today through the influence of Blacks A Fake.

Cheryl has been there almost every step of the way through racing and into retirement as a part-owner, labelling him the best horse to ever come out of Queensland.

“It was quite unbelievable, to think we could get such a special horse like him – it is the type of thing you only read about, a horse with the success he had,” Cheryl said.

“We did not pay a lot of money for him at the yearlings sales, to think you could fluke such a good horse was amazing.

“It was very exciting and it was good that he was able to be acknowledged for being such a good horse, which he was.”

With the TAB Queensland Constellations carnival turning to the TAB Blacks A Fake this week, it was a poignant visit home for Natalie, being back with her old mate in the days leading into the race named after his stunning career.

“I think every time he sees me, he thinks ‘oh, not her again’ because he probably thinks he is going to the races,” Natalie said with a laugh.

“It is lovely to see him like this, being so well looked after and happy, he deserves a great home in retirement.

“It is nice to see him enjoying it.”

The son of Fake Left won a remarkable 72 races from 105 starts with over $4.5 million in the bank for his loyal owners.

The first woman in Australia to have trained and driven an Inter Dominion winner and the first Queenslander to win four, Natalie reflects on his career with special memories.

“It was an amazing ride, it was a hell of a ride with the ups and the downs of it – it was mainly ups with him really,” Natalie said.

“It was great for my career at the time when I did it because it gave me confidence that I could mix it in the big smoke with the big guns.

“He was just a great, great horse and I know people like to compare horses over the years and I have been lucky to be involved with great ones like Lazarus and Adore Me, and other good ones in New Zealand, but I think this guy is just special because he was my sort of horse.

“It is an honour to have the race named after him every year.”

As Queensland’s only Grand Circuit event for pacers, the entire industry looks forward to the TAB Blacks A Fake every year with another outstanding field assembled in 2021.

The TAB Queensland Constellations heads towards the final night of the carnival featuring an incredible six Group 1s this week, with the Queensland Derby and Oaks, the Triad Finals and the Queensland Trotters Cup supporting the TAB Blacks A Fake.

By Jordan Gerrans for Racing Queensland