Butt and Purdon in action 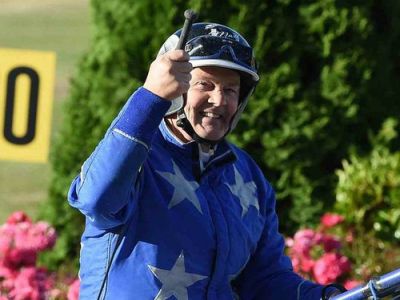 Anthony Butt’s manic schedule takes him to another Aussie state for feature racing on Saturday night.

Butt’s be a key player in Victoria, Tasmania and NSW in recent weeks and adds South Australia to the list when two of he and Sonya Smith’s emerging stars – Boots Electric and Perfect Stride – tackle SA’s biggest race the $60,000 Group 2 SA Pacing Cup on Saturday night.

Butt has chosen to drive Group 1 4YO Bonanza winner Boots Electric from a wide front row draw (gate six), while the in-form Zac Phillips will steer recent Cobram and Warragul Cup winner Perfect Stride from the back row (nine) in the 2645m feature.

“There’s not much between them and both have great chances. It’s a nice race for them,” Butt said.

Former Auckland Inter Dominion finalist Sicario adds some class from gate 10, while comeback pacer Shadow Sax should be improved by two runs back from a long spell for new trainer Matty Craven, but starts from outside the back row (gate 10).

On the same, the $30,000 SA Derby creates almost as much interest as the Cup with a clash between recent Kiwi import Aladdin (gate two) and last-start Group 1 3YO Classic winner Bondi Lockdown.

Aladdin created a stir thrashing a moderate field in last week’s Mildura Guineas for new trainer Greg Norman at his first run since leaving the Hayden Cullen (formerly All Stars) barn. He’s been crunched from $2.20 into $1.50 on the Aussie TAB.

That said, Bondi Lockdown ran down subsequent NSW Derby winner Patsbeachstorm when he won the 3YO Classic before a spell. He’s got a wide draw (gate seven) to overcome and will likely have to sit parked outside Aladdin.

Andy Gath holds the key to the Group 2 SA Trotters Cup with former Kiwi Justamollyarcher, providing he steps well from barrier four in the stand-start.

“He’s the cheapest trotter I’ve ever bought from NZ, but he’s done a great job so far and if he steps to the front he’ll take some running down,” he said.

With Kate Gath driving Tornado Valley in a bid to top $1 million in stakemoney at Geelong on Saturday night, Gath has snapped-up top local Ryan Hryhorec to drive Justamollyarcher.

Mark Purdon will make a surprise driving appearance at Geelong on Saturday night.

Purdon has stayed in town since working with son, Nathan, and some of his owners to pick some yearlings at inaugural Nutrien Sales last weekend.

He’s taking the reins on Nathan’s promising two-year-old filly Captn Me in a strong 2YO Classic.

She looks the leader from the pole, but it’s a fascinating race with David Moran’s unbeaten and exciting Beach Memories (gate seven) and much-hyped Emma Stewart/Clayton Tonkin-trained Irish Black Label (two) having her first start.