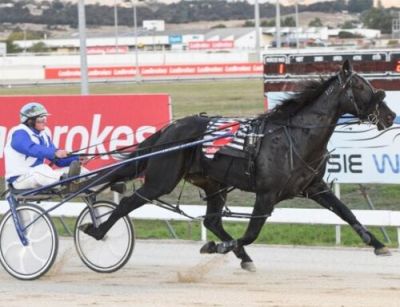 Talented three-year-old Rocknovertime will be aimed for a Victorian hit and run mission after recording his fourth career win in the Stan Leedham Memorial (rating 54 to 56) in Launceston on Sunday night.

Sent out as the $1.22 favourite, trainer-driver Paul Hill took the Rocknroll Heaven gelding straight to the lead in the 1680-metre event and was untroubled late to score a 11.8-metre win in a slick 56.0s last half mile with the gelding not even out of second gear late.

“I was very happy with him, especially when you look at the horses he was racing against tonight,” said Hill.

It was only the ninth career start for the pacer who has been placed in the Tasmanian Guineas and Tasmanian Derby at his only two other starts this season, and the trainer-driver is contemplating a trip across Bass Strait with the pacer.

“We might send him to Victoria to see if he could win his Vicbred bonus as that was only his third run this time in, then we will turn him out and bring him back for the Globe Derby later in the season,” explained Hill.

Northdown trainer Geoff Smith capped off a weekend double with Rambleon scoring a 1.1-metre win over My Celebrity in a rating 50 to 53 event.

Driven by Mark Yole, the Blissful Hall gelding was only having his fourth outing since joining the Smith stable.

“He was advertised online. He was racing up at Mildura, so I rang the bloke up and bought him,” Smith explained post-race.

Despite starting at $13, the win was no surprise for the trainer.

“He went good last start and had worked super at home during the week,” said Smith.

“He is well-bred and should win his share of races down here,” added the winning trainer.

The night’s fast class race looked to be a great race on the program, despite it being scheduled for 9:40pm.

It was won by Scooterwillrev who found the lead near the 1700-metre point and dictated affairs to score by three-metres over The Crimson Prince who had the gun run on his back in a mile rate of 1m 58.3s, with the last half mile in 57.5s.

Connections indicated that the pacer will have a short break.

The win was the 1,400th career driving win in Australia for Gareth Rattray, becoming the third Tasmanian to register the mile stone.

Rattray has also driven winners in New Zealand and Norway.

Troy McDonald was the in-form driver of the meeting, scoring with the Wayne Yole-trained Brighton Prince ($8.50), and the Ben Yole-trained Good Feelings ($4.00) and Ranieri ($9.00).