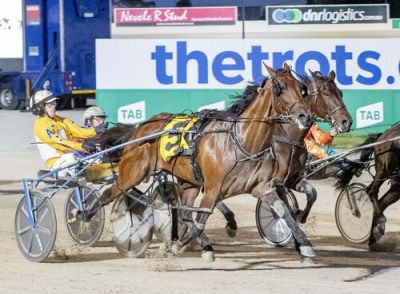 Two horses that have previously been crowned the Tasmanian Harness Horse Of The Year are searching for a start in Australian harness racing’s richest race, the $1,000,000 Miracle Mile at Menangle in Sydney next week.

Both Max Delight and Ignatius are searching for a start in Australia’s premier sprint race when they contest the final two lead up races tonight.

Max Delight is raced by East Devonport’s Mick Maxfield and has impressed in two runs back from an injury-enforced break.

Trained by David Aiken, the pacer will be driven by his son Josh who was also in the sulky for the pacer’s last start win in a Group 3 race at Melton on 6 February, recording a mile rate of 1m 54.5 for 2240 metres.

“The horse has come back well from a lengthy spell, David (Aiken) has him cherry ripe and he has drawn well on Saturday night. We are always a chance, but there are some quality horses in that line-up,” said Dean.

“Throughout his three-year-old career, David and Todd McCarthy did an outstanding job with him, and it will be no different with David and Josh,” he said.

Ignatius will be having his second start back in New South Wales after a Tasmanian campaign, but the pacer’s run of poor barrier draws has continued, starting from barrier nine on the front row after scratchings in race four at 19:50.

“We are not having much luck with the draws up there, but I thought his run a fortnight ago was pretty good. He was hitting the line as good as any other in the race after doing a bit of work early,” said trainer Todd Rattray about the $21 chance who takes on last year’s Miracle Mile winner King Of Swing, who has been installed as the $1.28 favourite from barrier two.

“I know it is a hard race tonight, but if he is alright, hopefully he can run in the top four or five,” added Todd, who has given the driving responsibilities to his older brother James.

The first two horses home in each sprint feature tonight are guaranteed a spot in the Miracle Mile, along with the winners of the Newcastle Mile and Chariots Of Fire. The remainder of the field to be selected from tonight’s sprints, the final field for the Miracle Mile, will be released tonight.