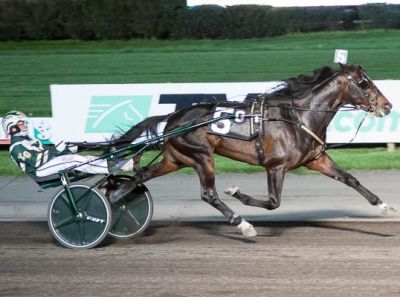 With things at a standstill at their home track due to a COVID-19 shutdown, a pair of harness racing horses who call Woodbine Mohawk Park home ruled The Meadowlands Saturday night as trotter It’s Academic and pacer Sintra scored in the co-featured $30,000 Preferreds.

It’s Academic benefited from a third-place, once-over-the-track effort from a week ago to score in 1:51.3. The 4-year-old son of Uncle Peter – Annapolis was sent to the gate as the 3-2 second choice in the betting and on a typical night that favored speed, left quickly from post five in the eight-horse field and led at every call through fractions of :26.3, :56.3 and 1:24.4 on the way to recording his 15th win from just 30 lifetime starts.

Scirocco Rob (Tim Tetrick), the 6-5 favorite, challenged the eventual winner at the three-quarter-mile mark, but was put away off the far turn as It’s Academic rolled to a convincing 3-length score. Scirocco Rob finished second with Buck Dancer (Andrew McCarthy) third.

A Ron Burke trainee who is owned by Brad Grant, It’s Academic returned $5.00 to win in lifting his lifetime earnings to $493,188.

“It just did not really work out last week when he got shuffled,” said winning driver Yannick Gingras. “Tonight, he proved he’s a nice horse. He can leave super-fast and he can go :26 [to the quarter], so I was able to get a good second-quarter breather [of :30]. He was full of trot late.”

Sintra was nothing short of scintillating in overcoming post 10 to score in 1:48.4. The 8-year-old gelded son of Mach Three – Dancin Barefoot left hard from the outside in the 10-horse field and got a spot fourth at the rail out of the first turn.

The 8-5 favorite came first-over at the five-eighths and made his way toward leader American History (McCarthy), who blazed fractions of :54.4 to the half and 1:21.4 at three-quarters after wrestling control away from the early leader, 5-2 second choice Ana Afreet N (Tetrick), at the three-eighths.

Continuing to chip away at the leader’s edge, Sintra, who paid $5.40 to win, grabbed the front with less than an eighth to go before holding off a fast-closing-along-the-inside Ana Afreet N by a neck in 1:48.4. American History held third.

Driven by Todd McCarthy and trained by Brett Pelling, Sintra not only overcame the outside post but also a 27-day layoff to register his 36th career victory from 83 starts. His earnings now stand at $1,150,360 for owners Michael Guerriero, Kelly Waxman, Nunzio Vena and Frank Cirillo.

“I was concerned with where he was going to be at,” said Todd McCarthy, whose hot hands guided five winners on the card. “You try to be as conservative as you can. I knew we’d have to go first-over at some stage. He showed his class tonight. I was a little worried as to how much we had left [in the stretch] but he got there.”

SPEEDY SORTS: Last Saturday, the Jennifer Bongiorno-trained Nicholas Beach rocked the clock to the tune of 1:48.2 to become the second fastest performer of the year in harness racing. Last night, her Stars Align A became the fastest horse of the year, recording a 1:48 clocking in the seventh race high-end conditioned pace, besting Let It Ride N’s Jan. 2 mile time of 1:48.1. All three miles took place at The Big M.

AN EARLY START: Before the beginning of the betting card, there were two non-betting divisions of the New Jersey Breeders Maturity contested for 4-year-olds on the trot.

In the $12,500 event for mares, 2020 New Jersey Sire Stakes champion Ab’sattitudexpress went wire-to-wire for trainer Lucas Wallin and driver Tim Tetrick in 1:54.2. The daughter of Trixton – Abbie’sgotattitude sprinted home in :26.1 to best her only opponent, Spoiled Princess, by 2Â¾ lengths.

The Ake Svanstedt-trained and driven Back Of The Neck, who won a division of the 2020 Stanley Dancer, proved best of five horses in the $15,000 split for horses and geldings in 1:55.4 after leading at every call. The son of Ready Cash – Big Barb hit the wire two lengths in front of Play Trix On Me, the NJSS champion from a year ago.

A LITTLE MORE: There were no winning tickets sold in the 20-cent Pick-6, setting up a carryover of $9,992. Those with five correct collected $64.00. … For those who want to jump into what no doubt will be a big Pick-6 pool Friday night, free past performances for every race of every Meadowlands card are available by going to playmeadowlands.com. … All-source wagering was typically strong for a Saturday at $3,552,966, the eighth straight program to see betting of over $3 million. … Racing resumes Friday at 6:20 p.m.

by Dave Little, for The Meadowlands