Standardbred Canada reports that harness racing driver Louis-Philippe Roy had a solid night at the office during Friday’s 10-race card at Woodbine Mohawk Park thanks in large part to his sweep of the Harvest Series finals for three-year-old colts and geldings. 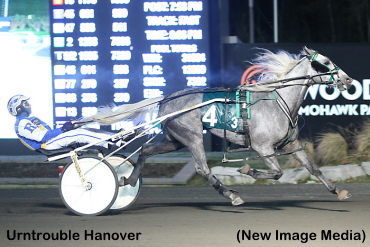 Urntrouble Hanover parlayed a second-over trip into a 1:54.4 triumph in the $48,400 final for the sophomore trotters.

There was a cavalry charge for the early lead, and Louis-Philippe Roy wanted no part of it with Urntrouble Hanover who got away seventh with the Meg Crone trainee. Wheeling In Cash and Emerald Wings battled to the quarter pole in :27.4 before the latter marched to the top. Race favourite Mystic was parked into the backstretch, but swept up to take the lead heading to the mid-way point.

Mystic led at the half-mile marker in :56.4 and then the three-quarter pole in 1:26.1, but he came up short in the lane. Deal With Lucus put heavy pressure on the favourite around the final turn, and riding his cover was Urntrouble Hanover who kicked off his cover at the head of the lane and then used a closing kick of :28 to win by 2-1/2 lengths over Duke Lavictoire. Warrawee Windsor rallied from last to be third while Mystic had to settle for fourth.

Control Heaven powered to the lead in the $52,300 Harvest Series for sophomore pacers, and once he cleared to the top it was game over for the others.

Roy hustled the Chantal Mitchell trainee to the lead from Post 5, and while racing parked past the quarter in :26.4 he eventually found his way to the pylons and then rolled the field through middle panels of :56.2 and 1:25.1. A closing quarter of :27 was enough for the gelding to score by three-quarters of a length over Take A Gamble in 1:52.1. Big Chic Magnet was third.

Sent off as the 2-5 favourite, the son of Control The Moment-Somewhereinheaven now boasts a 4-3-1 record from 19 trips to the track this season. The career winner of $123,743 is a homebred owned by Doug Millard Mitchell Di Cenzo and Gold Standard Equine LLC.