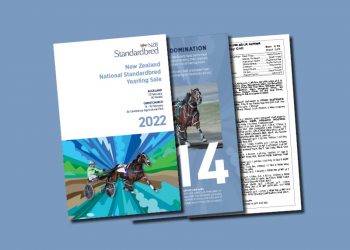 Another high quality harness racing sales catalogue has been assembled for the 2022 edition of NZB Standardbred’s National Yearling Sale held at Karaka and Canterbury Agricultural Park next summer.

The online catalogue for NZB Standardbred’s fourth annual yearling harvest is now available to view here, with printed copies due to arrive in mailboxes in December.

Following on from last year’s successful format, the Sale will operate over four days allowing international buyers to be able to participate via NZB’s online bidding platform at their local time.

For decades, New Zealand-bred standardbreds have performed at an elite level on the world stage demonstrating their strength, stamina and Group One-winning abilities in both hemispheres.

In recent seasons, NZB Standardbred’s very own graduates have added to that lineage of success, dominating on racetracks across Australasia.

Buyers will also have the opportunity to secure top-class yearlings from blueblooded families, with a number of siblings to Group One winners and progeny from Group One-winning dams.

The catalogue boasts a selection of proven and emerging sires representing both gaits, including Always B Miki, Art Major, Bettor’s Delight, Captaintreacherous, Downbytheseaside, Majestic Son, Muscle Hill, Vincent and What The Hill.

Also included is a strong lineup of progeny by first season sires including Lazarus, En Solitaire, Fear The Dragon, Tactical Landing and Volstead.

With 138 yearlings set to go under the hammer in Auckland and a further 277 in Christchurch, the action-packed week of inspections, parades and selling is set to appeal to buyers and investors, both locally and internationally.

2022 marks the debut of the pre-NZB Standardbred National Yearling Sale meeting, with a mega race night of six Group or Listed races confirmed for Alexandra Park on the eve of the Sale. Starting at the later than usual time of 7:30PM (NZT), the Harness Million Series meeting will be held on Saturday 12 February 2022, before selling commences at Karaka on Sunday.

Buyers can purchase confidently with all yearlings available to inspection during on-farm parades. NZB Standardbred and New Zealand based-agents and trainers will be available to inspect on behalf of prior to the Sale and on the grounds at the Karaka Sales Centre and Canterbury Agricultural Park.

International buyers are encouraged to participate via NZB’s user-friendly online bidding platform, while all New Zealand-based buyers and agents are welcome to attend the physical sale sessions in person in Auckland and Christchurch.

For more information, or to get in touch with one of the NZB Standardbred team members call +64 3 381 0141 or email rachel.deegan@nzb.co.nz.