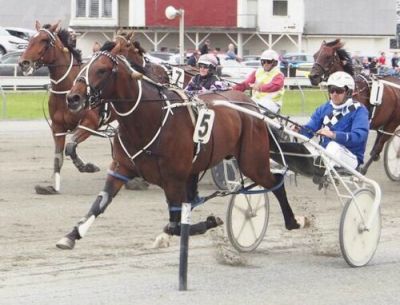 Five Southland trained horses are down to start on Jewels day at Cambridge next Sunday.

Pearl Harbour will start from barrier one in the Woodlands Stud Four Year Old Diamond for Winton trainers John and Katrina Price.

The Prices have had a number of runners in the Jewels over the years including Presidential Reign, Repartee, Chicago Bull, Rockabilly Blues and Democrat Party.

The Prices are unable to travel to Cambridge as John had a hip operation last Friday.  Katrina says it’s likely the Somebeachsomewhere will stay in the north for the $40,000 Listed Uncut Gems at Alexandra Park in a fortnight before returning home where’s she’s likely to go to stud.

Gray took You’re So Fine to the Cambridge Workouts today where he was driven by Williamson who was pleased with his run.

You’re So Fine was sold earlier this month to West Australian owners and will leave New Zealand after the Jewels, travelling to Perth where he’ll be trained by Gary Hall Senior. The current Southland owners  MCC Syndicate, have retained a 20% share in the horse.

The first Williamson runner on Jewels Day will be Ragazzo Mach in the IRT Three Year Old Emerald. He also trialed today at Cambridge over the Jewels distance.

Ragazzo Mach will start from barrier three on the second row which Williamson says is not ideal.

He said over the short distance at Cambridge in such a quality field, the race is likely to be tactical.

Ragazzo Mach was sold to West Australian interests a few months ago and Williamson hopes to meet up with the new owners for the first time at Cambridge.

Once through this run he’s due to head to Western Australia where he’ll compete in some of the big three year old features in Perth.

Kiwitrix, also trained by Williamson, topped off this preparation for the Garrard’s Horse and Hound Four Year Old Ruby with a win last night at Alexandra Park which impressed his trainer.

His draw next Sunday is six.

Williamson says Kiwitrix is on the market and he’s hopeful the  gelding will be sold to either Auckland or Australian interests. If the sale doesn’t happen he’ll likely stay in Auckland and start in the Uncut Gem on June 18th.

Pembrook Playboy is the last of the Williamson trio. He’s drawn one on the second row in the Civtec Four Year Old Emerald.

Williamson says owner Chris Alcock will be travelling to Cambridge for the end of season feature.

Southland interests extend beyond those mentioned above.

Todd and Fleur Anderson who breed under the Taffy brand have five horses that they bred running in Sunday feature meeting; La Rosa, Emmy,  Dance Til Dawn, The Falcon, and Bad To The Bone.

Braeview Kelly who runs in the Dunstan Feeds Three Year Old Diamond, is owned by Paul and Mandy Pierce of Gore.

Peter and Jan Williams bred and share in the ownership of Outofmyway while Leaf Stride was bred by Michelle Caig.

The West Otago ‘Arden’ brand have two runners – South Coast Arden and Arden’s Horizon, starting on Jewels Day while Nathan Williamson not only has three horses he trains starting but he also bred Son Of Patrick which starts in the Mitre 10 Three Year Old Ruby.

Southern Harness Board member Murray Little will have a close eye on Christianshavtime in the Civtec Four Year Old Emerald. He bred the gelding, while Lex and the late Heather Williams bred Ultimate Stride, one of two starters for Oamaru trainer Phil Williamson.

So plenty of interest for Southern Harness fans next Sunday. Good luck.