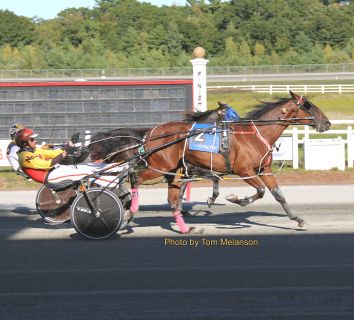 Plainville, MA — Major Leaguer tripped-out to the head of the lane and then brushed hard to the wire to win the $17,500 Winners-Over harness racing feature pace at Plainridge Park on Monday afternoon (Sept. 21).

Heavily favored Paternity Suit A (Drew Monti) pushed away the gate and led the field to the quarter in :26.3 with Major Leaguer (Nick Graffam) tucked in the garden spot. Just before the group reached the half, JK Will Power (Mitchell Cushing) came first over and pushed the pace to :27.1 in the third quarter, where Paternity Suit A opened up a two-length advantage.

Rolling around the far turn Major Leaguer was in the perfect spot to strike and eventually shook loose at the top of the lane. With a margin to reel in, Graffam kept after Major Leaguer and they methodically made up ground on the leader, eventually catching Paternity Suit A by ½ length at the line to win in 1:50.4.

It was the fifth win of the year for Major Leaguer ($17.60) and owner Jimmy Whittemore. Marissa Chadbourne trains the winner.

The co-featured $15,000 condition for 4-year-olds and under went to Pacer Racer (Drew Monti) who took the lead past the half and closed the deal with a one length win over a fast closing Finnbar (Ron Cushing) in 1:54.2.

Drew Monti led all drivers on Monday with four wins followed by Nick Graffam and Shawn Gray with two apiece. Sheena Mcelhiney was the top trainer with two wins.

Racing resumes at Plainridge Park on Thursday (Sept. 24) with post time at 2 p.m.

The Massachusetts Sire Stakes begin on Sunday (Sept. 27) at Plainridge Park and run through Monday (Oct. 26). There are three preliminary legs for each age, gender and gait followed by the finals. For more information on the MASS please log onto the Standardbred Owners of Massachusetts at www.sominc.net.

By Tim Bojarski, for the Standardbred Owners of Massachusetts