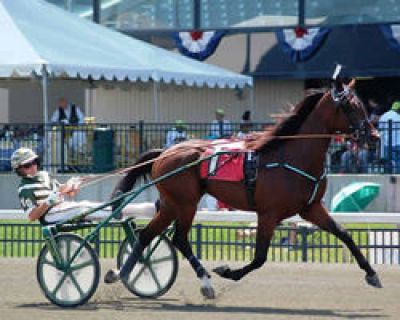 Pastor Stephen, the Dan Patch two-year-old Trotting Colt of the Year and a winner of more than $1 million as a two-and three-year-old, is standing this season at Premier Acres in Indiana and his 2021 stud book is now full and closed.

“We are very happy with the response from breeders,” said Dean Miller, a co-owner of Pastor Stephen with Taylor Made Stallions. “He has had just a fantastic book of mares. Anytime you bring a horse like this back from Europe after missing the scene here for a few years you can get a little nervous.

“Have to say thanks to the breeders that did come out and support Pastor Stephen,” Miller added.” And not just from Indiana, but we have been getting mares from all over the country.

Pastor Stephen has been very successful in the breeding shed all across Europe with a more than 70% rate of his foals making it to the races, all despite the fact that he was held up in a court case and lost two full breeding seasons.
To see his profile, click here. <premieracresindiana.com/>

“The horse is proving himself in Europe,” Miller said. “They are racing very well over there and this year he has had a great season there as a stallion. I get calls almost daily from Filip Van Hauwermeiren in Europe telling me about this horse and that horse, all by Pastor Stephen, who are doing well at the races.

“He is throwing nice big strong horses,” Miller said.” And that 7/8th mile track at Hoosier Park, will be just perfect for his foals.

“He has his work cut out for him this year,” Miller said about Pastor Stephen’s stallion duties. “From August to January we were freezing his semen to send over to Europe. Then he breeds at Premier Acres now until July and then he heads down under where I think he will be quite popular.”

Pastor Stephen will later this year board a plane bound for Northern Rivers Equine at Kyabram, Victoria in Australia to commence his first Breeding Season in the flesh down under.

His trainer Jimmy Takter summed him up nicely;

*“He was a really good gaited colt, an easy horse to be around and race. He was in the top three of his class as a three-year-old. Unfortunately, he got injured in a transport incident before the Hambletonian where he finished third in his elimination and fifth in the Final from post 10. After that a coffin bone injury put an end to his career in the USA and he was sold to Europe. I have reserved two breeding rights to him now that he is back in the USA.”*

He is the older full brother to the champion Father Patrick 1.50.4 $2.558 million. Father Patrick also didn’t win the Hambletonian but was voted the USTA Trotting Colt of the Year as a Two- and Three-Year-Old.

He has now commenced his stallion career in glorious style having sired the millionaires Greenshoe 1.49.8 and Amigo Volo 1.51 plus the outstanding filly Sister Sledge 1.51.4 in his first two crops.

On 11th April Father Patrick was the Sire of the highest priced Trotting Yearling ever sold in Australia when the Colt from the Angus Hall mare Une Belle Allure was knocked down for $170,000.

The pedigree of Pastor Stephen has two year old speed stamped all over it – evidenced by;

** Cantab Hall [ the Sire of Pastor Stephen ] – undefeated in 10 starts as a Two Year Old and voted the 2003 USTA Two Year Old Trotting Colt of the Year.

** Chocolatier [ half brother to the dam of Pastor Stephen ] – voted the 2005 USTA Two Year Old Trotting Colt of the Year.

Cantab Hall, who is a descendant of the Valley Victory sire line, was an instant hit as a Sire from the time he commenced Stud duty in 2005. He has now sired eleven millionaires and is about to shoot past $100 million in progeny earnings. In 2020 he sired both the Colt and Filly winners of the North American Breeders Crown Finals.

Pastor Stephen will make a perfect consort for so many mares in the Southern Hemisphere and especially mares by Majestic Son. Majestic Son, who is by Angus Hall, has sired more than 800 foals in the Southern Hemisphere who are now 3 years or older so the owners of those 400 or so mares should have Pastor Stephen on their radars. To date two of Father Patrick’s best three progeny are from mares sired by that Garland Lobell sire line, which is responsible for Majestic Son.

Pastor Stephen is a grand looking 16 hands individual. Take a look at the impressive video on the Northern Rivers Equine website and judge for yourself.

Dr Kath McIntosh and her team are thrilled to be providing his Southern Hemisphere base in 2021 . His Service Fee is $5,500 including GST.

Bill O’Donnell: What is going on in Ontario