This Is The Plan fastest in Borgata 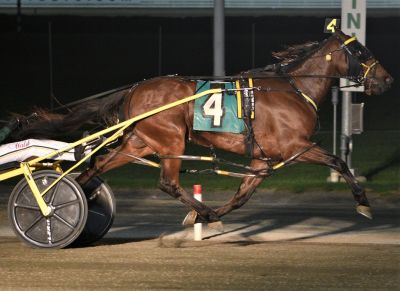 This Is The Plan, Western Joe, and Leonidas A scored harness racing victories in the trio of $40,000 divisions of the fourth leg of the MGM Borgata Pacing Series on Monday night (April 5) at Yonkers Raceway. In addition to the on-track action, betting was also brisk on Monday’s 10-race card as the handle entered seven-figure territory at $1,037,217.95.

After finishing second in all three of his appearances in the series coming into this leg, This Is The Plan (Yannick Gingras) broke through for the first time in style, taking the opening split in 1:51.1. Gingras fired This Is The Plan to the top from post four, and he would put up fractions of 27.2, 56.1, and 1:23.3 before he closed in 27.3 to win by three lengths over pocket-sitter Raukapuka Ruler N (Jordan Stratton). Mach N Cheese (Joe Bongiorno) held third over favorite Let It Ride N (Dexter Dunn).

THIS IS THE PLAN REPLAY

In the second section, driver Todd McCarthy put the hammer down with None Bettor A and roared through stations of 26.3, 55.1, and 1:23.1. On the far turn Sheriff N (Daniel Dube) attacked the leader two-wide from the pocket, with favorite Rockapelo (George Brennan) picking up cover from third to sit second-over. Even though Sheriff N and Rockapelo had first dibs on the tiring leader, it wound up being a cavalry charge through the stretch after the hot tempo, and taking advantage was Western Joe (Dunn), who sat inside in sixth and rallied through a gap on the pylons on his way to the win by a neck in 1:52.4. Rockapelo wound up second, with Sheriff N back in third.

Leonidas A (Austin Siegelman), returning after a one-week break, ran his MGM Borgata Pacing Series record to an unblemished three-for-three in the final flight. Leonidas A settled in third behind Ostro Hanover (Tyler Buter) and Lyons Steel (Corey Callahan) in the early going, but Siegelman had him out and on move before the 28-second opening quarter went on the board, and he would take command after that marker. Leonidas A would go on to put up a 56.4 half and a 1:24.4 three-quarters, and a 28.3 final kicker gave him the victory by 2 1/4 lengths in 1:53.2. Lyons Steel was second after a first-over try, narrowly bettering Ostro Hanover.

There is one more leg of the MGM Borgata Pacing Series to go, and that will be held next Monday (April 12). The final will take place on Monday, April 19.

Then, on Friday (April 9), Yonkers has a couple of $35,000 splits of the final preliminary round of the Blue Chip Matchmaker Series for pacing mares. The first of those races will take place as a non-wagering contest, and the second one is race two on the pari-mutuel program. In the non-wagering tilt, Blue Ivy (post one, Tyler Buter/Todd Buter) and Machnhope (post three, Andrew McCarthy/Noel Daley) will both shoot for their third win in the series, and in the other Blue Chip Matchmaker match-up, Alexa Skye (post four, Todd McCarthy/Jeff Cullipher), currently three-for-three in the event, meets up with one of last Friday’s victors in Siesta Beach (post three, Matt Kakaley/Nick Devita).