“Artie” steps out onto the training track 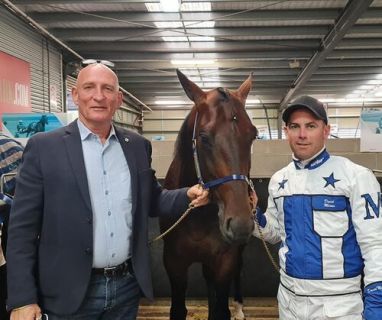 An infected hoof forced trainer-driver David Moran to leave his star at the NSW property of Luke and Belinda McCarthy at Cobbitty when he had to scratch from the Newcastle Mile on February 19 and then forego a “lifeline” berth two weeks later in the Miracle Mile.

But yesterday a chipper Moran took “Artie” for his first jog in more than five weeks at the Kialla training complex, near Shepparton.

“Gee I’m rapt to have him back home and in work. I’m absolutely over the moon,” Moran said.

“Everything seems really good, so fingers crossed the hoof abscess clears up completely,” he said.

The ongoing battle with the abscess was eventually treated with an incision into the hoof.

“We did that about 10 days ago to release the pressure and it seems to have worked,” Moran said.

“I reshod him the other day and now it’s a case of clearing up the rest of the infection and just keeping it clean to let the hoof grow back.”

On February 6, he claimed his seventh Group One victory with a powerhouse display to win the $500,000 Del-Re National A.G Hunter Cup at TABcorp Park Melton.

Moran said that while he was confident his five-year-old was well on the road to recovery, he would be keeping a “close eye on things.”

“In a couple of weeks, I’ll take him to our vet and get an MRI scan to be on the safe side,” he said.

“He’s in really good condition and bright as ever—-he was looked after a treat up at Luke and Belinda’s property that’s for sure.”

A COVID-19 scare forced Moran to make a hasty dash across the border on February 13 to ensure he could target the Newcastle and Miracle Miles, when Victorian Premier Dan Andrews announced a five-day border lockdown.

The stable was then hopeful the pacer would be okay for the Miracle Mile a fortnight later—but it wasn’t to be.

Moran and Gordon now have a winter trip to Queensland in the back of their minds.

“We’ll just have to see how things pan out, but we’d love to be part of the winter carnival and tackle races such as the Sunshine Sprint and The Blacks A Fake championship in July,” Moran said.