Get Legs back to winning ways 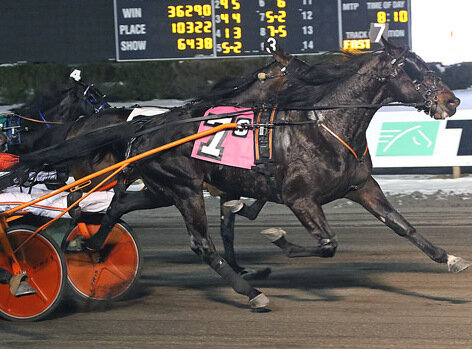 Get Legs entered last week’s opening round of John Brennan Trotting Series at Yonkers Raceway with eight wins in nine starts at the Meadowlands, but miscued over the sloppy going and had to settle for rallying for third. He made no such miscues this Wednesday, though, cruising to a 1:55 2/5 harness racing victory.

Driver Andy Miller didn’t hustle Get Legs away from post two in Wednesday’s final $20,000 division, but he didn’t tuck on the inside, either, letting his horse move steadily up on the rim to get the lead from Lady Jeter (Scott Zeron) after the 28.4 opening quarter. From there, Get Legs put up the half in 57.2 and the three-quarters in 1:26.2, navigated the far turn without any issue, and pulled away impressively in the lane on his way to defeating Lady Jeter by 5 1/2 lengths. P L Notsonice (Renaldo Morales III) came in third after a first-over try.

In other John Brennan Trotting Series action, Tyler Buter had a pair of winners in Stinglike A B K and Timon AS.

STINGLIKE A B K REPLAY

Buter nearly nabbed another win with first-over attacker Grinder in the second section, but Windsong Pioneer (Holland), who put up stations of 27.3, 57.1, and 1:25.3, kept Grinder at bay in game fashion, hitting the wire a nose to the good in a 1:56.1 mile. Guilty Desire (Stratton) got third after a second-over journey.

The victorious 5-year-old E L Titan gelding is trained by Paul Stafford for owner Thomas Ceraso Jr. Windsong Pioneer picked up his 14th career win, and he boosted his bankroll to $110,932. Windsong Pioneer, dispatched at 7-2, returned $9.00 to win and led a $24.40 exacta and a $66.50 trifecta.

Stakes action continues at Yonkers on Friday (April 9) and Monday (April 12) as the final preliminary rounds of the Blue Chip Matchmaker Series and MGM Borgata Pacing Series are held. There are two $35,000 divisions in the Blue Chip Matchmaker, one a non-wagering affair and the other race two on the pari-mutuel program, and a trio of $40,000 splits of the MGM Borgata are slated as races four, five, and six.